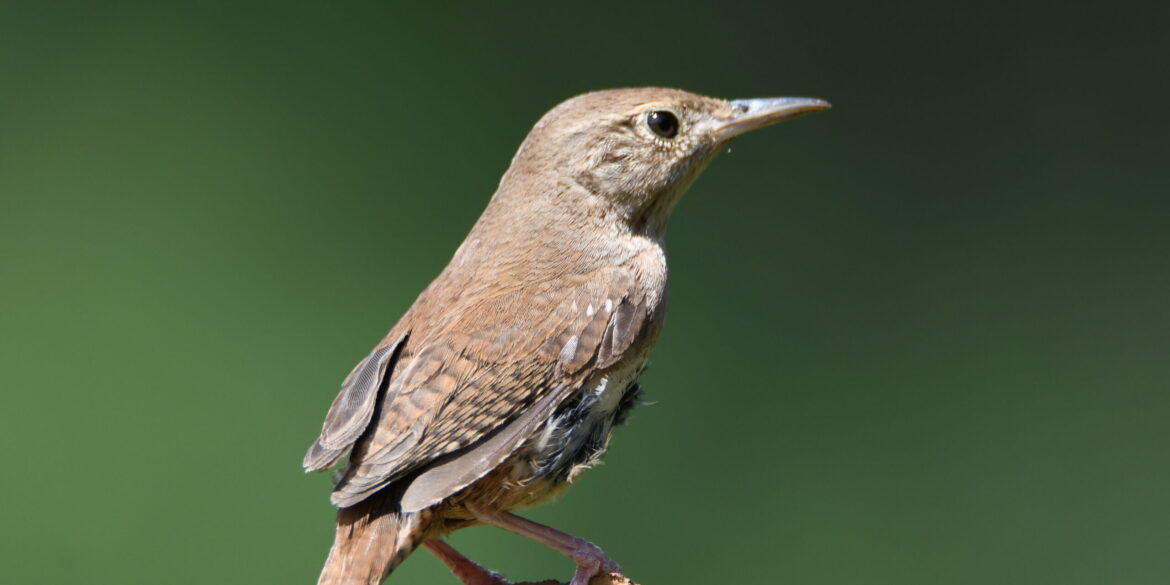 I wish the translation of my name was as awesome; my name literally translates to Crowned billboard.

Ugh. So not cool or awesome or even correctly descriptive of me. At least I don’t think so.

My kids and I and some friends were swimming last week and I heard this Nightingale cave dweller singing away, and looked up to see her feeding her babes, which were nesting in a fence post.

What was it, you ask? Who is this Nightingale cave dweller?

None other than the House wren.

Look at her. Muddy, coppery brown, a few lighter stripes on her tail and underside, a few spots on her back, some dark under feathers on her chest. Brown beady eye. Long beak. Pink toes. Nothing intriguing or super interesting about her. Just another brown bird, right? Not with a name like Nightingale cave dweller.

Let’s talk about her size first.

Average length is 4.7 inches. According to themeasuredthings.com, that is 1/15 the size of Danny DeVito. Or around two times the size of a golf tee.

Average weight is 0.35 ounces. That’s 1.5 times the weight of a quarter. Or six times heavier than a paper clip.

In other words, she’s about as tiny as they come.

And she’s not a Scarlet Tanager or Indigo Bunting or Eastern Bluebird or Goldfinch or even an American Cardinal. All of these birds, even the females, have feathers of red or blue or yellow, showing quick flashes of brilliance when they fly or twitch.

To be honest, I wouldn’t have even noticed her, feeding her babes in the corner fence post surrounding the pool we were swimming in, if I had not heard her singing. But she is a “nightingale”, and my oh my, did I hear her sing.

Let me digress further for a moment.

Nightingale? Not truly. Nightingale’s are a different species of bird entirely, that live in northern Africa and Europe, not here in the United States. Many say their songs are “romantic” and “melodic,” but I do think the wren’s song is prettier.

My dad first introduced me to wrens when I was a teenager. We had a river birch that lived right off our deck; he hung a bird house in it and after a few days, a couple moved in and started their family. We would sit on the back deck and hear their songs, something like this. (please click on the word “this” and listen, so you get the full effect. Thank you, mybackyardbirding!)

Did you hear that song? THAT is melodic, sweet, lyrical, lovely.

To complete the name, aedon, in Greek mythology, refers to a woman who mourned the loss of her son, so Zeus changed her into a nightingale, her song a mourning song. Here in the U.S., we refer to anyone with a lovely voice as a nightingale.

That song, the wren’s song. I tell ya, there is nothing that makes me grin bigger than watching a teeny, tiny wren sitting on a small branch, singing their heart out. Their chest gets pumping and the bottom half of their beak moves up and down. I feel like I’m watching a tiny opera singer. They stop, catch their breath (or so I assume) and then do it all over again. Then look around, see who’s listening, hoping to catch a response from another wren close-by. They might flit to another branch, a little higher, hoping to get their song REALLY out there to be heard.

If you ever hear a soprano, singing from the trees, look for a tiny, brown, well camouflaged bird flitting among the branches, like a little brown flash. Then just watch for a minute. You’ll find yourself grinning. You’ll find yourself wanting to answer their call. You’ll want to know what they’re saying and if you’re good, they just might answer back. Probably saying, “Look here, human, this is my territory and that’s my lady in that nest sitting on my kids. Sing away all you want, silly human, but those eggs and that nest and that lady are mine.”