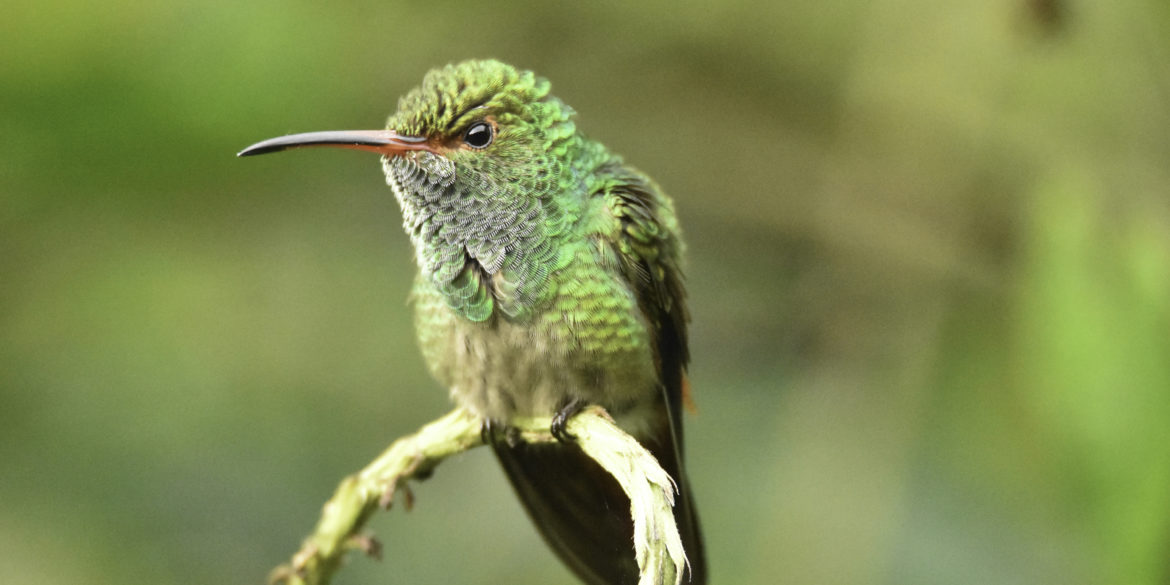 In Sitio de Mata, Costa Rica, sitting in a valley full of sugar cane and coffee beans and plant life as abundant as ants in their nest, is a home – 3 small bedrooms, a living room, and kitchen.

The porch is as big as the house itself, covered, yet open on all sides. On the porch is a table which can seat two or four or ten. 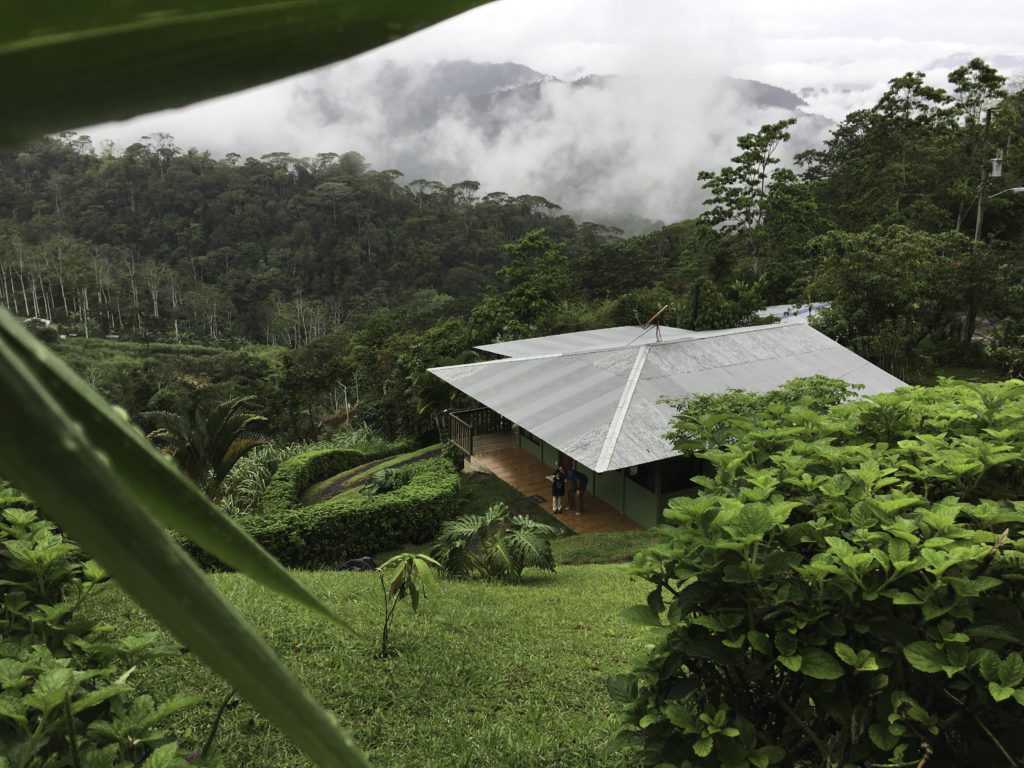 The view from the porch changes with the light and the mist, one moment revealing an entire hill you didn’t know was there, the next hiding it, as if you were in a game with mother nature.

I learned to sit on this porch in the morning, coffee nearby and camera in hand, in order to watch our new friend, a white-necked Jacobin. He would bob and weave among the flowers, chasing other birds away in order to maintain his territory.

See the white stripe on the back of his neck? Seems like more of a square in this photo, but that is how I identified him. He came everyday, and stayed all day long. I got to know him and his antics well. 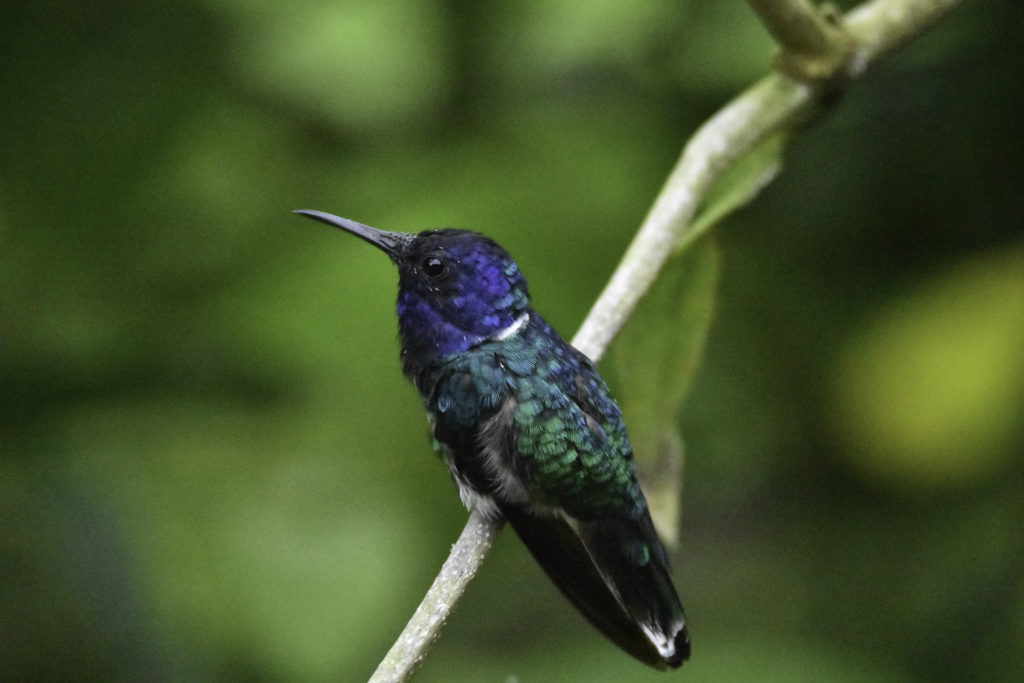 The branch he is on? His branch. His vantage point. Even when he flew off to chase other birds, he always came back to this branch. It afforded him the best view – of the hillside, of the feeder, of the flowers, of his place.

After watching him for days, I felt like he flew to this branch to pose for me and I couldn’t stop taking photos; he was so handsome. I imagine him still there today, chasing the other hummingbirds, looking for the lady with the camera through the rain.

Every morning he would appear, landing on his branch, to watch his hummingbird feeder. Or so he thought.

He met resistance with a rufous-tailed hummingbird which perched a few feet away, eager to get to the food as well. 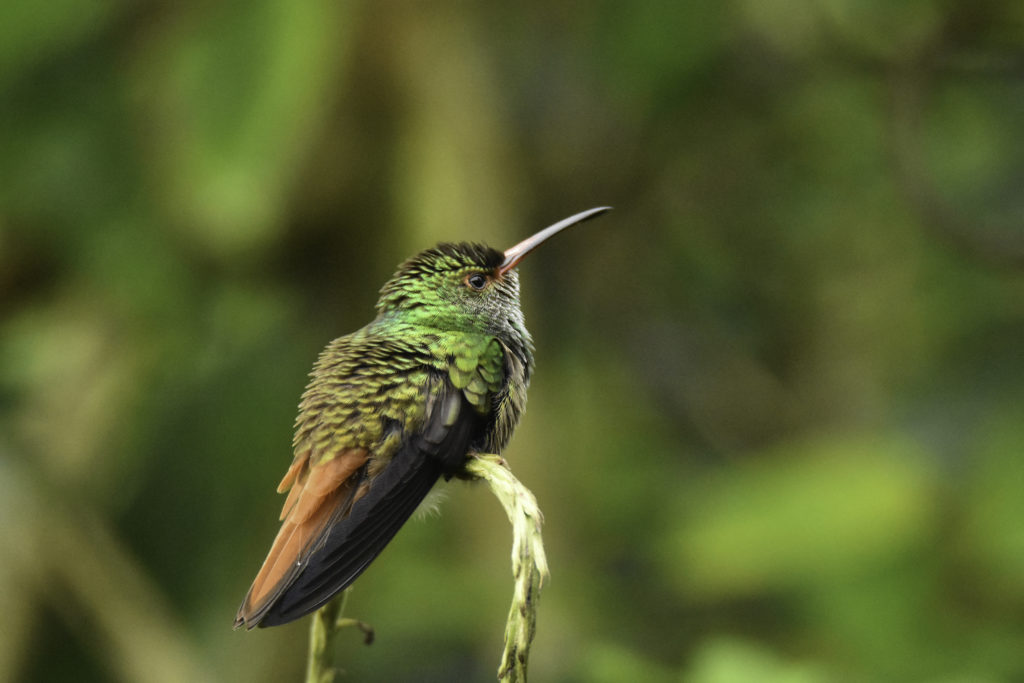 A daily ritual which I came to enjoy. 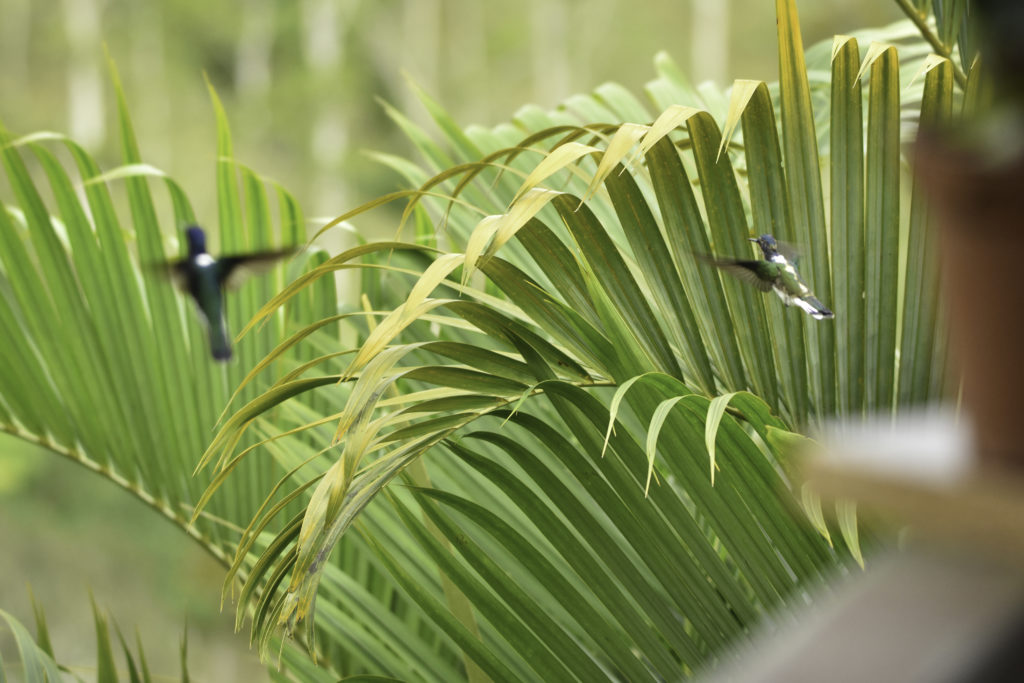 Rufus loved the bush which lived right off the porch. 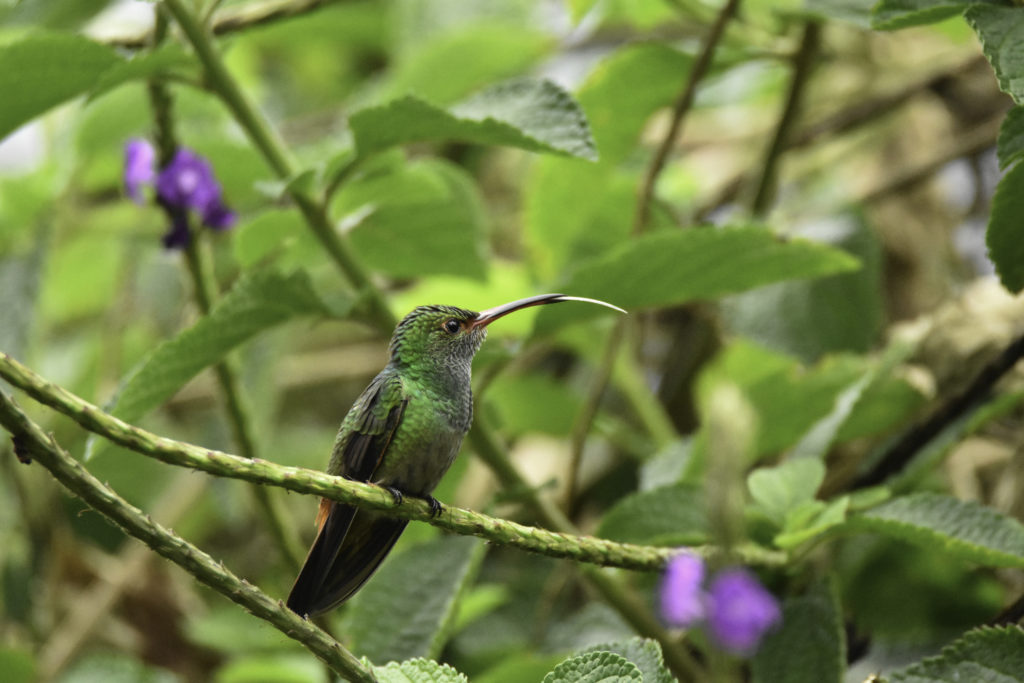 The branch he is sitting on? That was Rufus’ vantage point, a vine of the purple porterweed bush.  He was so well camouflaged there that I didn’t notice him the first 24 hours. 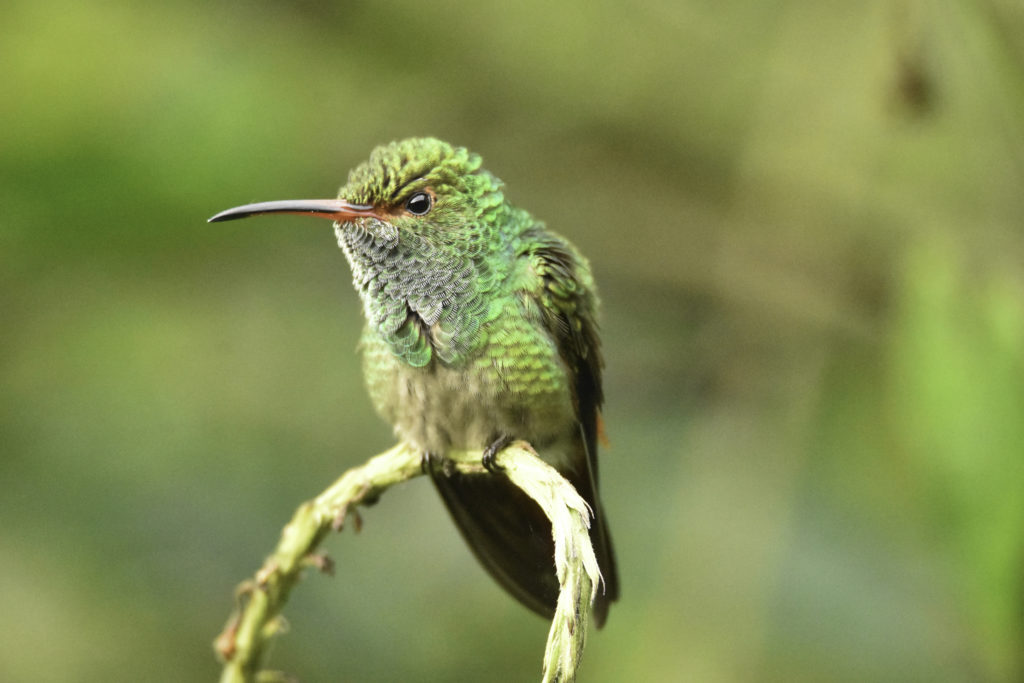 Rufus became my favorite. That green around his neck. Sigh. It was the most beautiful emerald green and then one day, the clouds came up and the sky darkened a bit. Rufus sat on his branch, in the rain, and he cocked his head to the left and his feathers glowed. 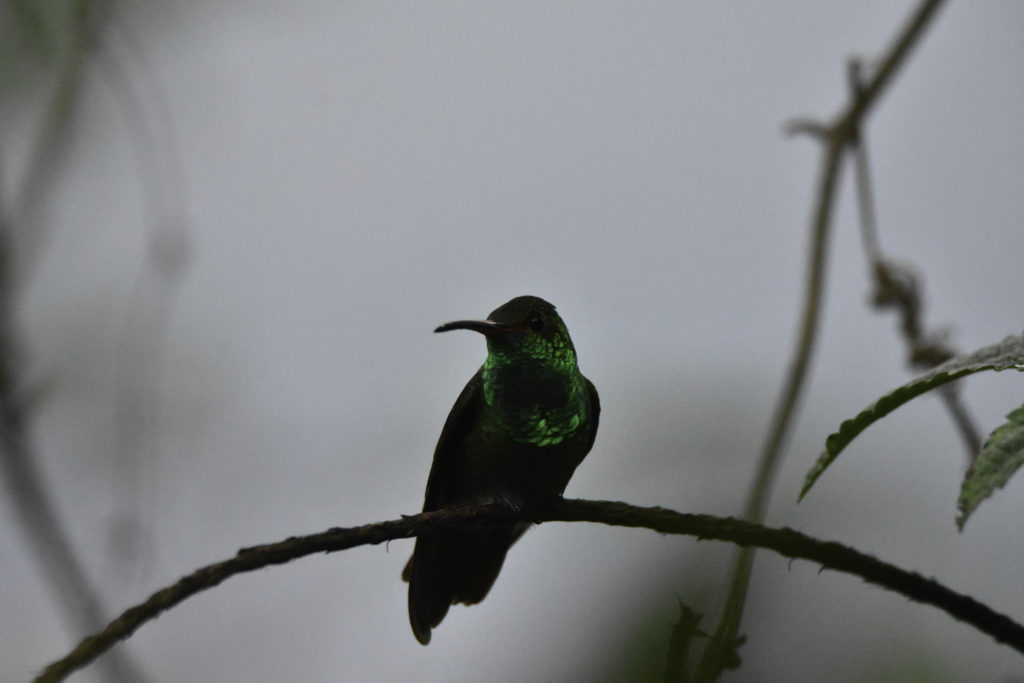 He ruffled his feathers a lot, whether to shake the rainwater from his body, to appear bigger, or simply just to move around, I’m not sure. But every time he moved I saw news colors on him.

One day, this guy appeared, a purple-crowned fairy. He had a dark band of feathers across his eyes and face. I wanted to name him bandit because he looked and moved like one, stealthily and so fast. 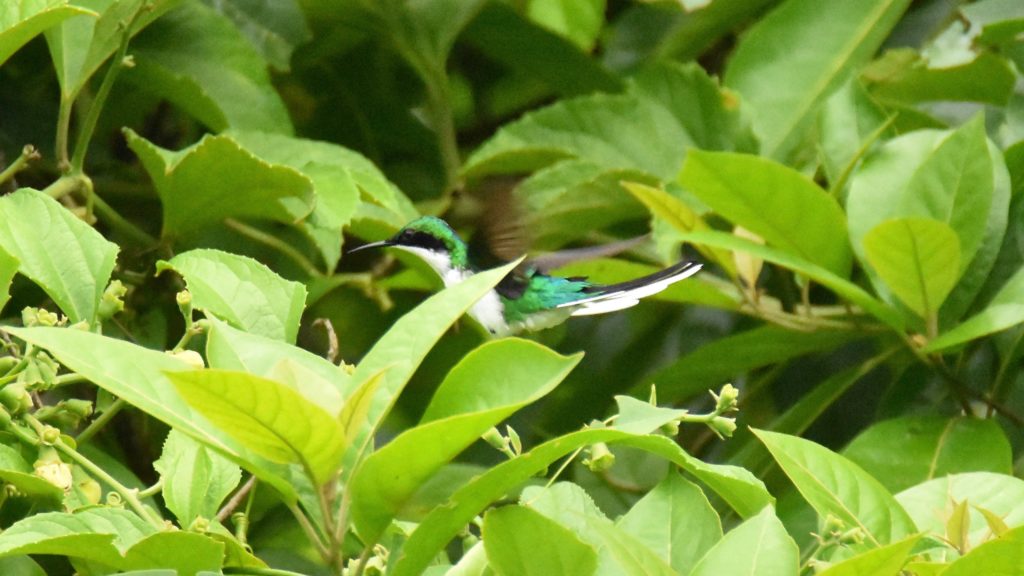 And then Rufus came back and I had to take more pictures. Sigh…Just one more photo… 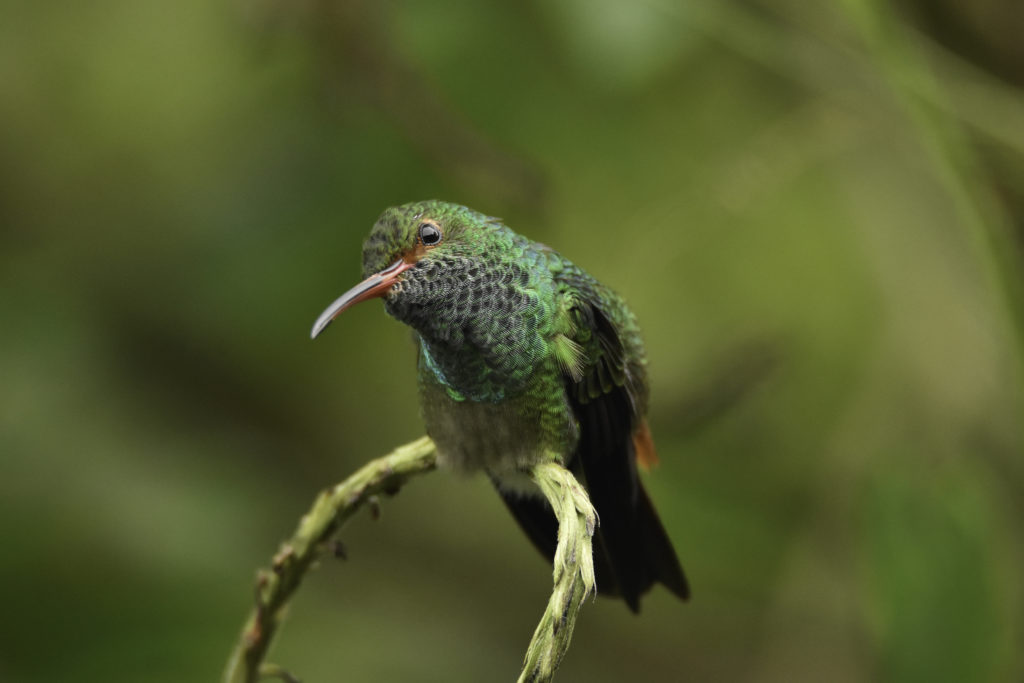 The birds of Costa Rica were so abundant, so colorful, so incredibly loud, and so beautiful. I took photos and captured them all as best I could. 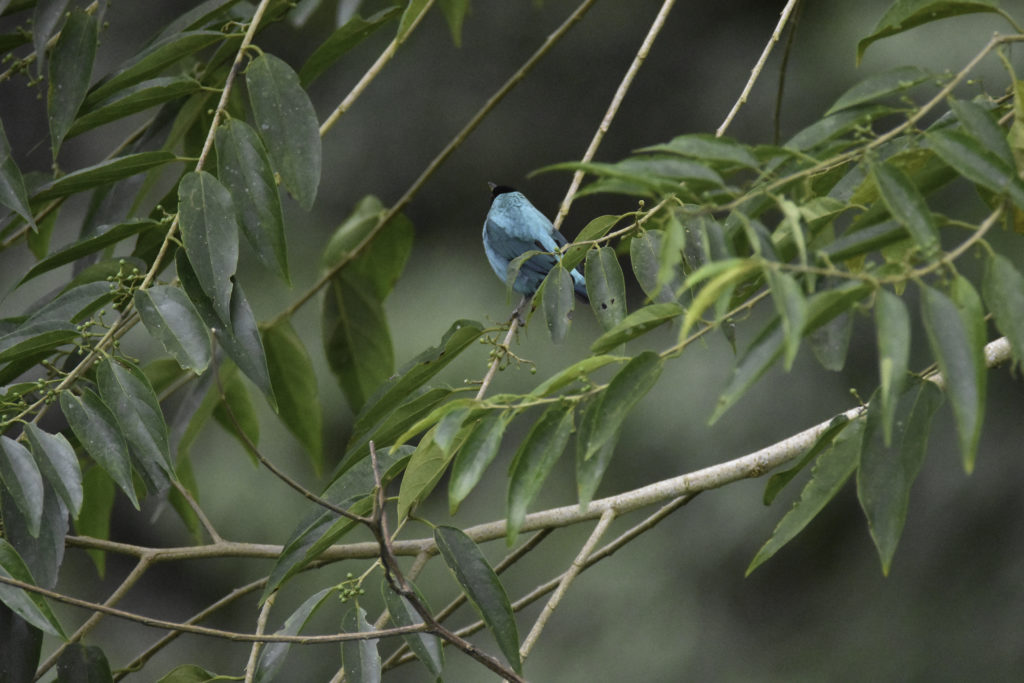 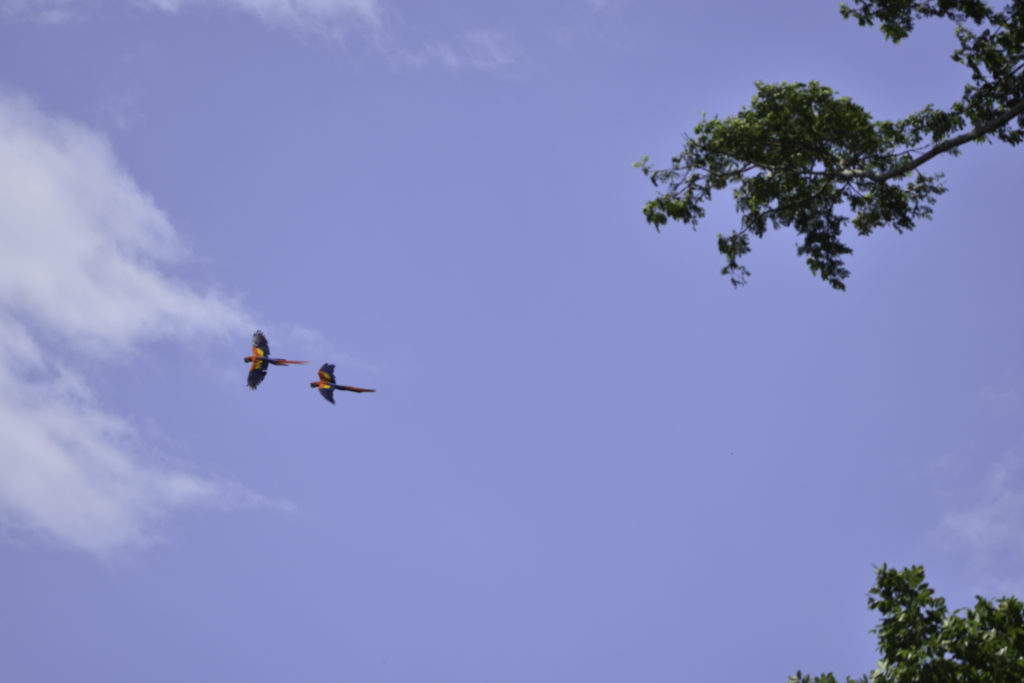 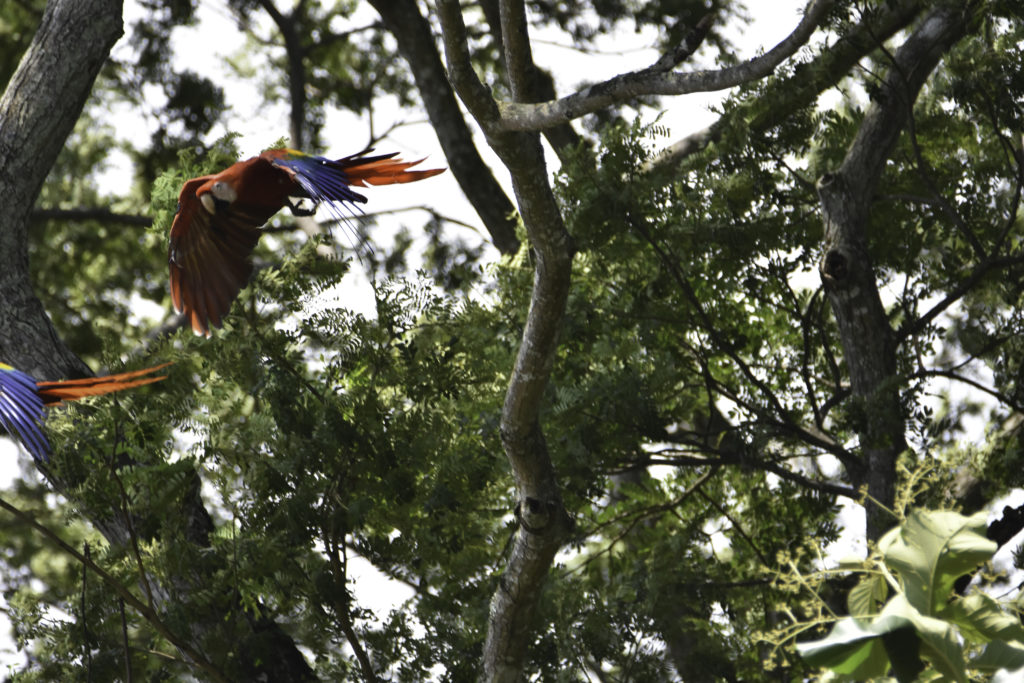 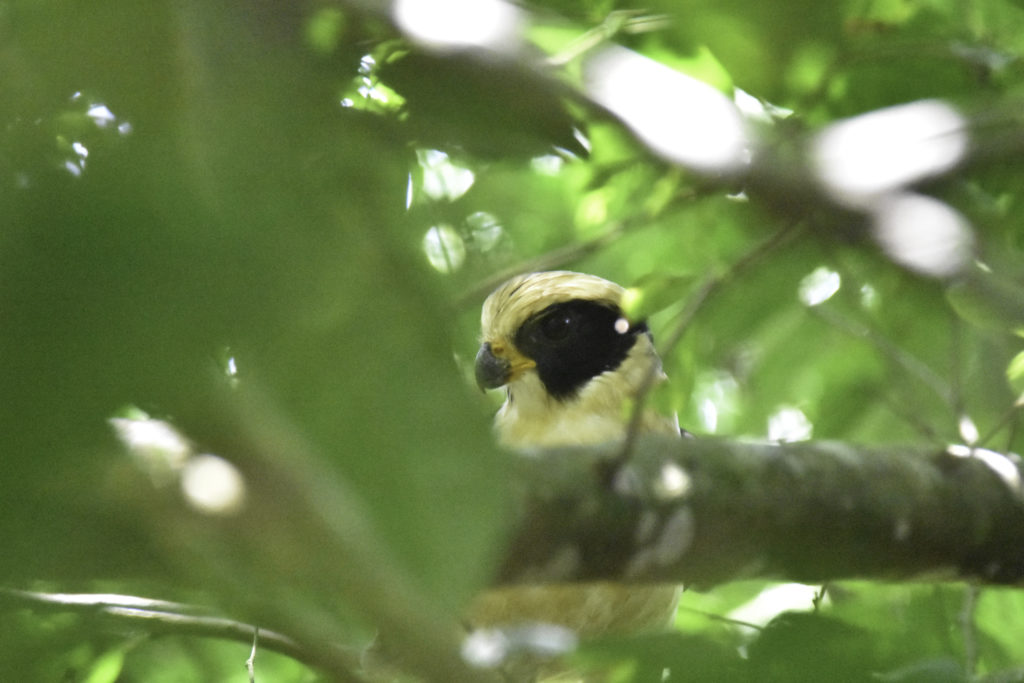 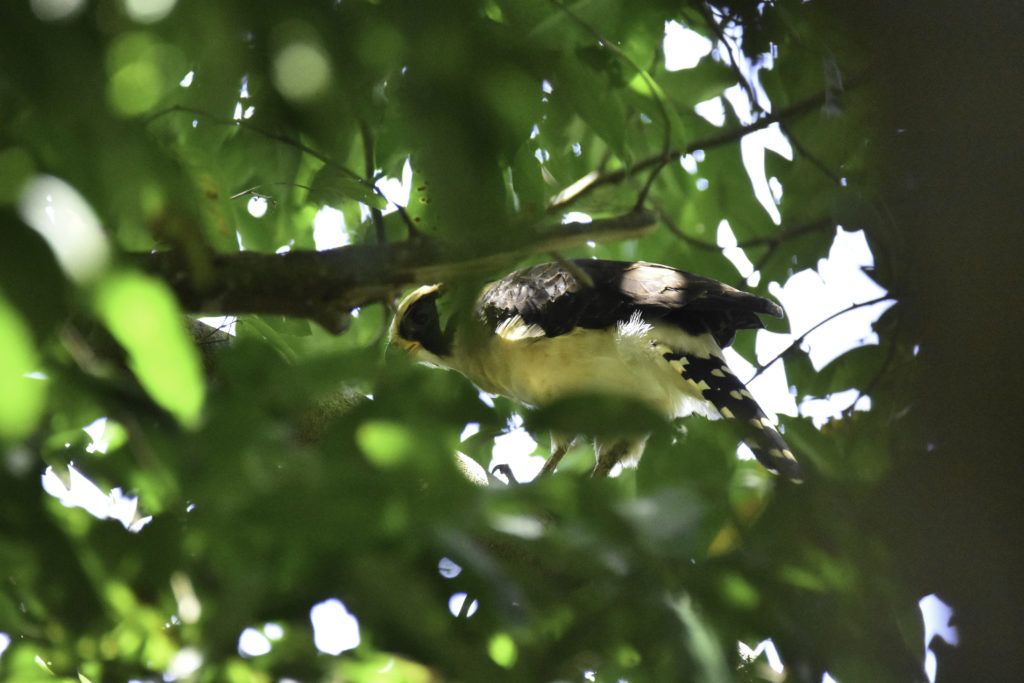 And then there were the rest of the animals… 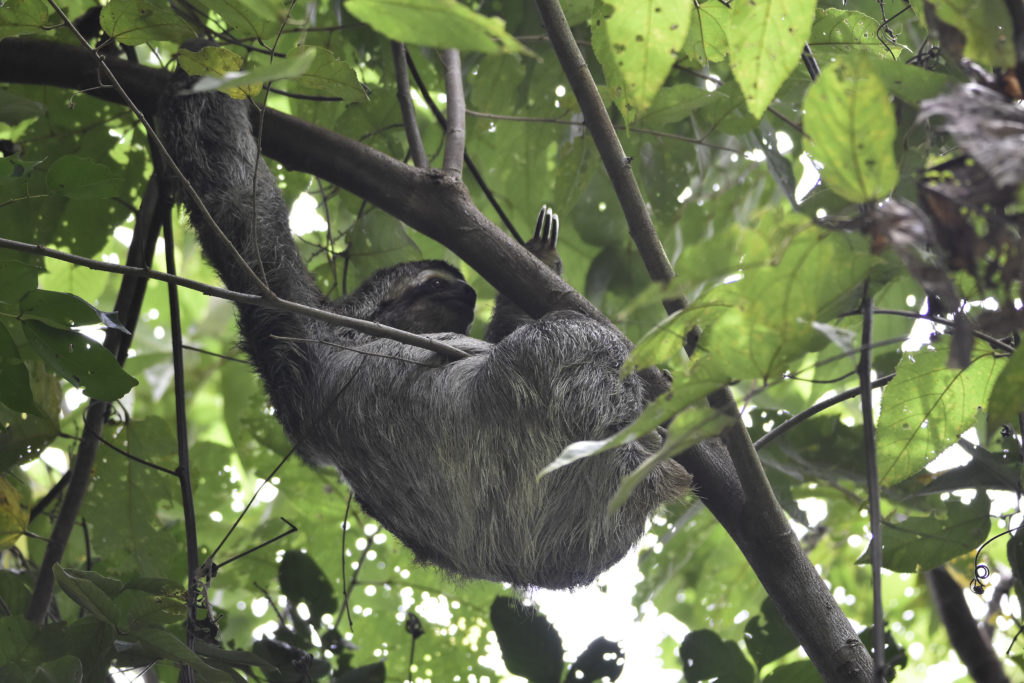 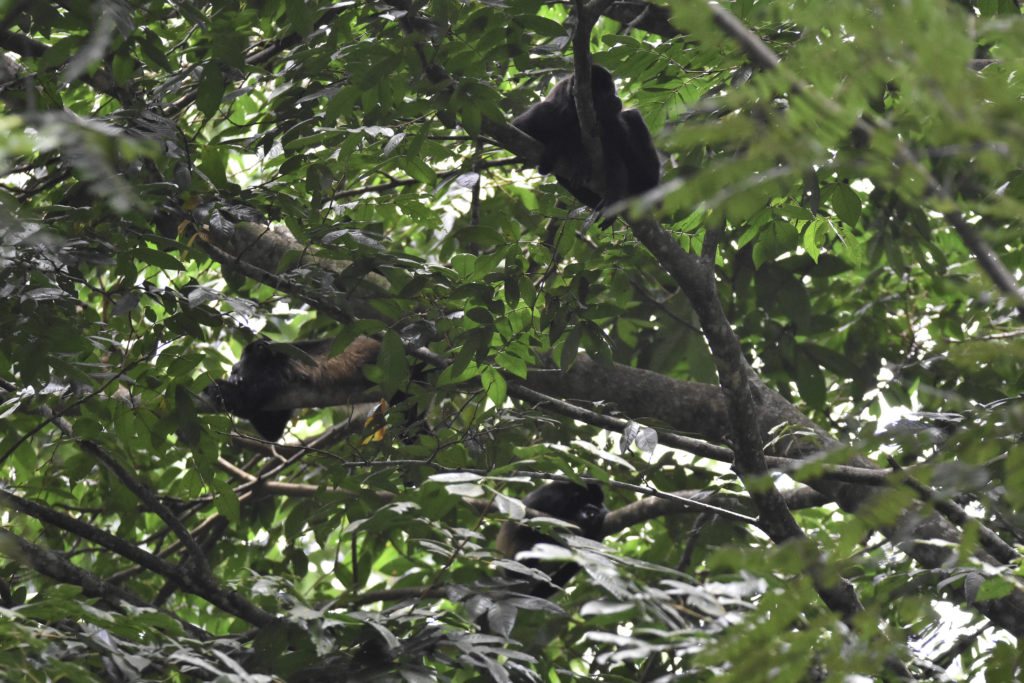 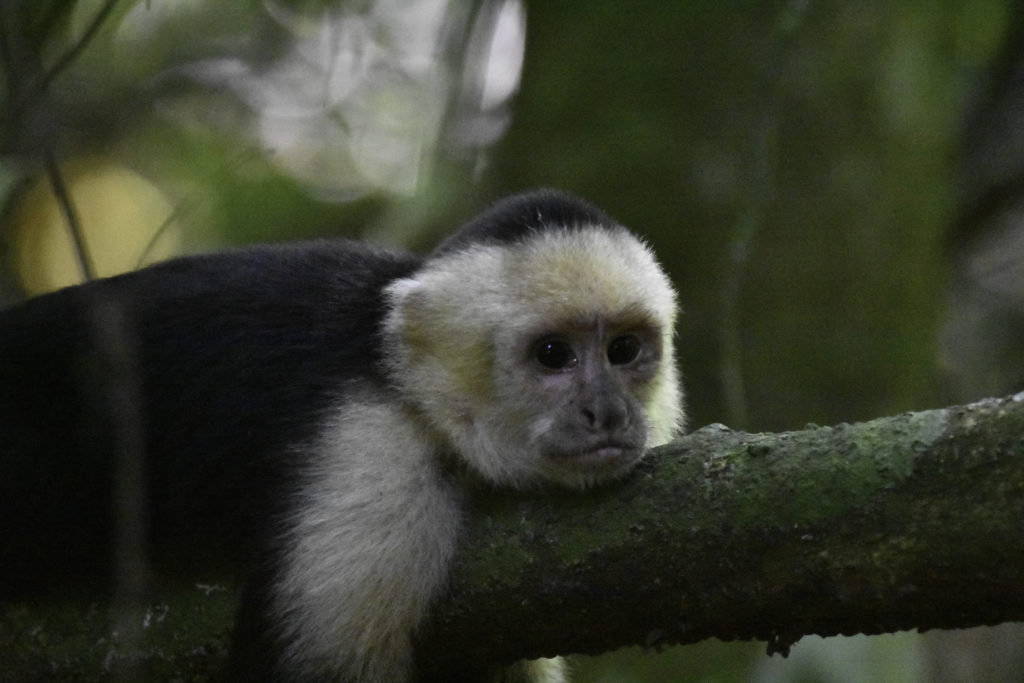 The eyelash pit vipers, the side-striped vipers, the Ctenosaurs, and the basilisks, ancient! 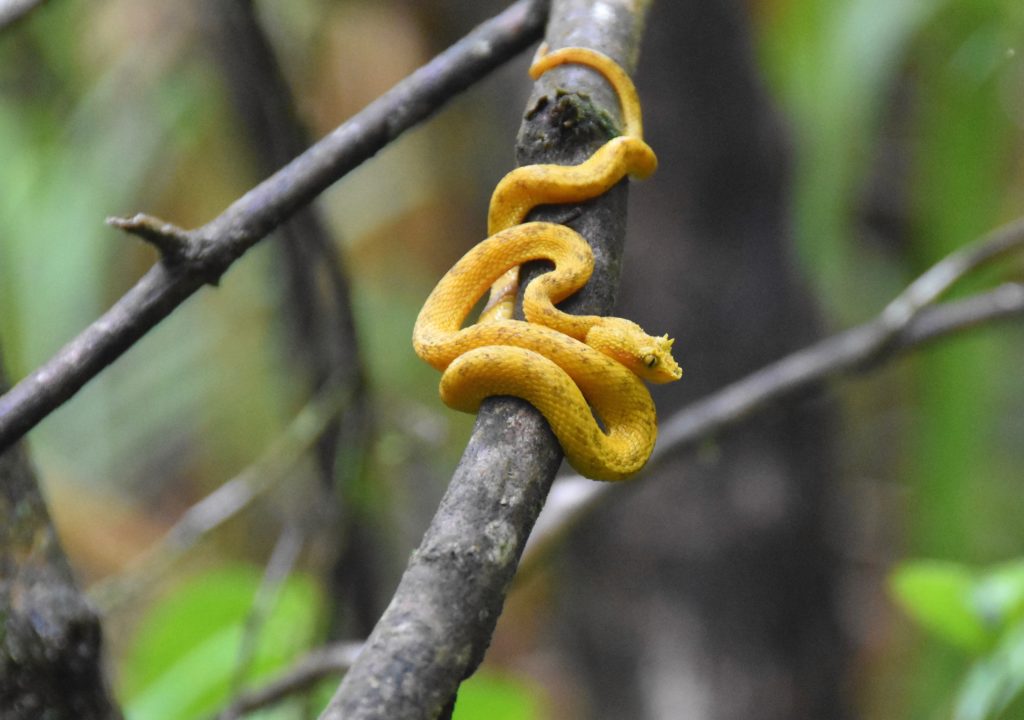 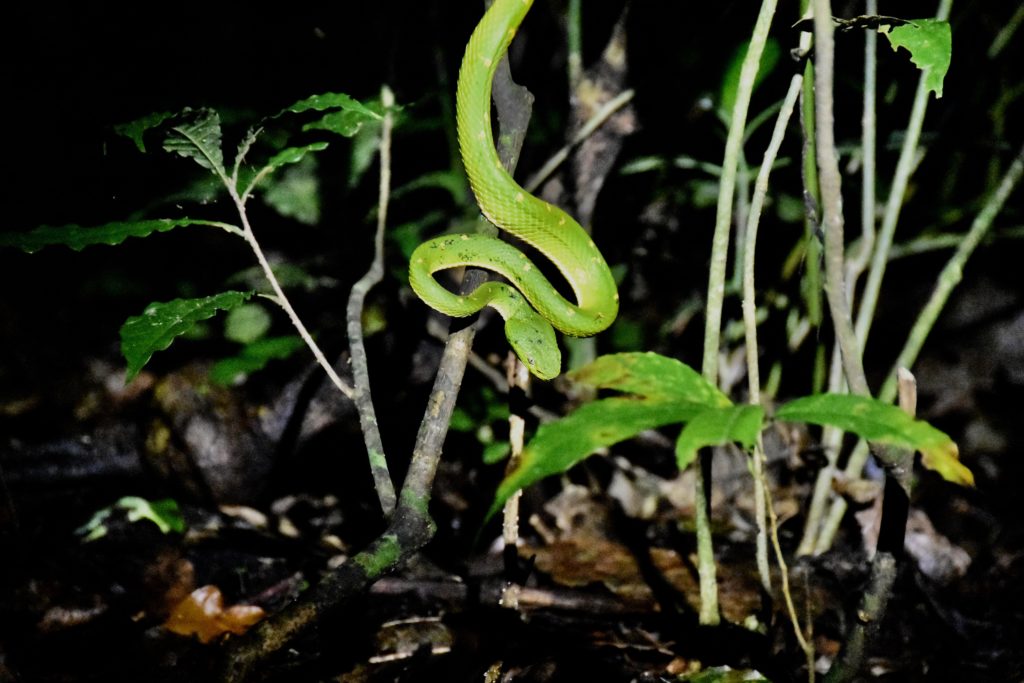 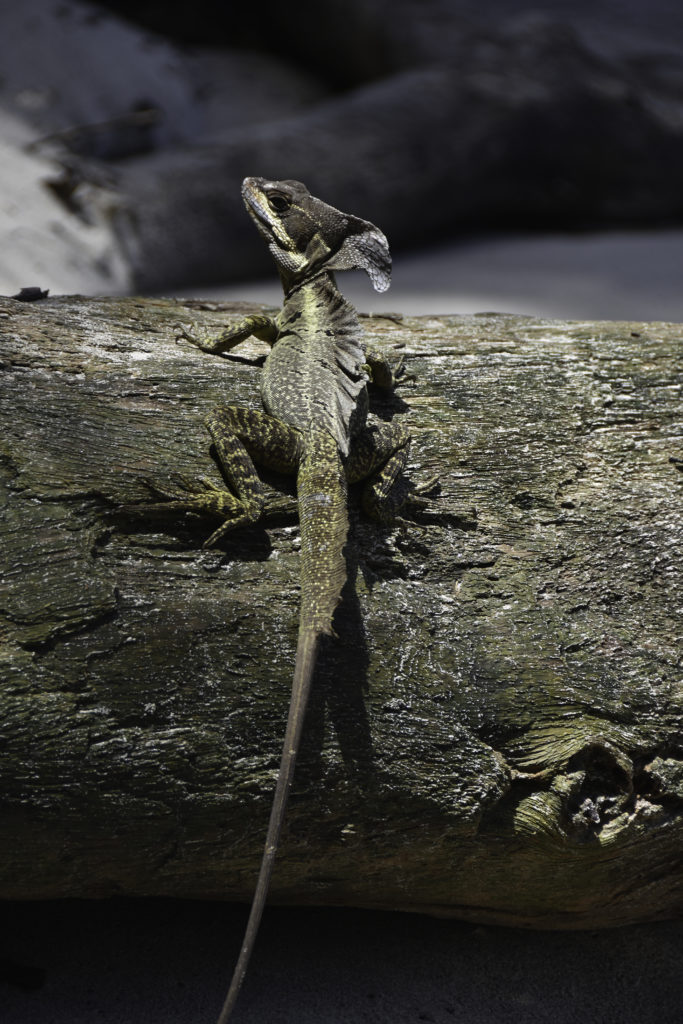 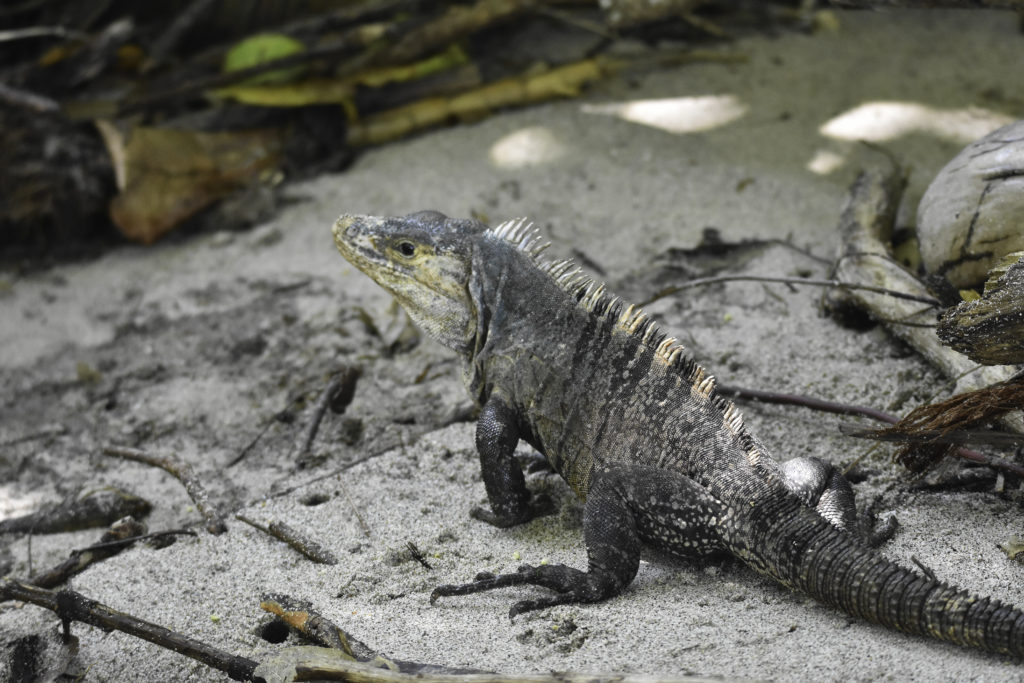 We did not seek out these animals, trekking far into the jungles in the hopes of seeing them. Oh no. All of these animals were either flying up to our house, just off the edge of a well-worn hiking path, or lying beside us on the beach.

They were our neighbors.

They were incredible to see so close-up and in their own habitat.

Which reminded me, of how much I need to stop every once in awhile and take a look around, because there’s always something to see. You just have to look.

And then Rufus would come back, cock his head, and squawk at me and when he did, I’d see another new color and take just one more photo. Just one more. What if I didn’t capture that color yet? 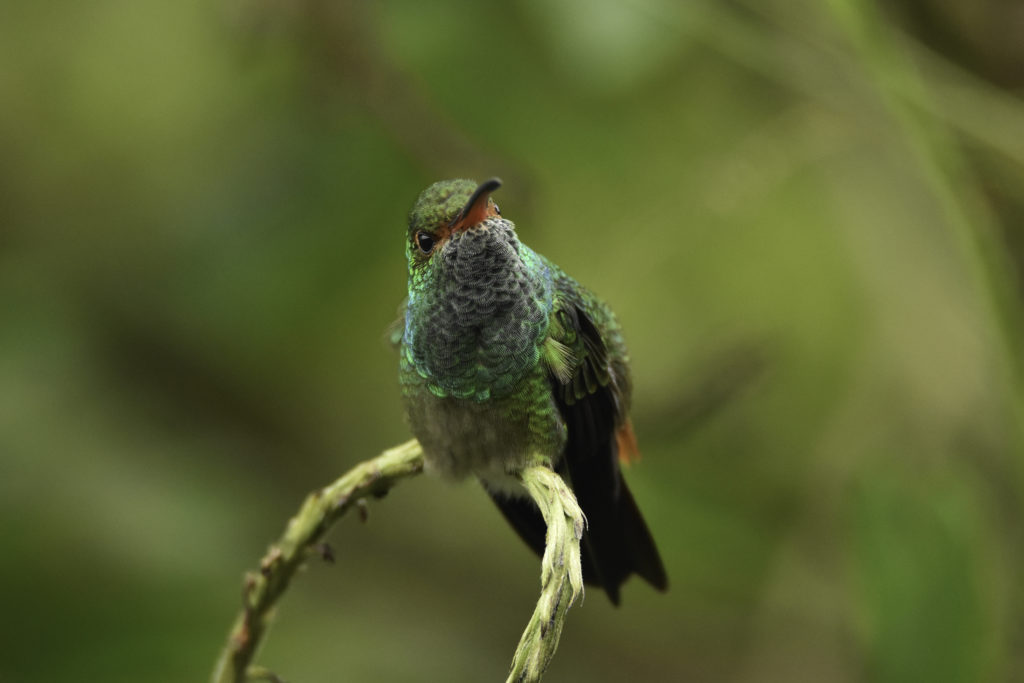